A legal battle over the estate of a Texas frontierswoman continues decades after her death because of a preventable planning blunder - failing to consult with a qualified attorney and relying on a do-it-yourself approach.

Mildred L. Ethridge drafted her own last will and testament without consulting an attorney.

In a single typewritten page, she managed to cause enough confusion over her estate to prompt allegations of embezzlement and spark a legal fight among family members that remains unresolved 25 years after her death.

A native of the West Texas oil patch, Mildred was a successful businesswoman and real estate broker who had amassed a considerable fortune by the time she died in 1994 at age 86. As proprietor of a profitable newsstand in downtown Midland, Mildred persevered through the Depression. An accomplished horsewoman, she acquired pastureland and orchards beyond the city limits and inherited land from her father.

Mildred also has a unique connection to U.S. history. Her custom-built frame house in Midland would later become the home of the George H.W. Bush family, which included two future presidents, a future first lady and a future governor of Florida. The house that Mildred built is now a national landmark as the boyhood home during the 1950s of George W. Bush, the 43rd president.

Mildred, who never married and had no children, drafted her will in 1990 when she was 82, naming her nephew-in-law Fred D. Davis Jr. as her executor. Mildred was the youngest of her nine siblings. At the time of her death, Mildred's nearest surviving heirs at law were her many nieces, nephews and their descendants. 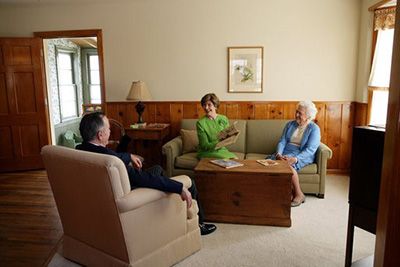 Mildred kept her self-written will short and simple. First, she declared its purpose was for the “distribution of my entire estate, real, personal and mixed.”

Next, she appointed Fred as executor and declared that, “I give Fred D. Davis Jr. all my personal effects to clear my estate after my death.” Finally, she left her half-interest in her residence and homestead to one of her nieces. No other provisions were made.

After Mildred's death, the county probate court appointed Fred as executor of the estate. Fred filed an inventory of the estate that listed the money in Mildred's checking account and the household items she owned, including furniture and a television.

However, at her death, Mildred owned mineral royalties that she never mentioned in her will, and they were not included in the inventory that Fred submitted to probate.

After the will was probated in 1994, an oil company began paying royalties to Mildred's estate, described in legal papers as in the “hundreds of thousands” of dollars. According to court documents, Fred interpreted the ambiguous will to mean that he was sole heir of Mildred's estate, and he transferred the funds into his own account.

Fast forward 16 years to 2010, and the status of Mildred's estate would take a new twist. Mildred's heirs at law discovered they might be entitled to the ongoing royalty payments, according to court records. Perhaps Mildred's surviving family members took notice of the never-ending revenue stream that flowed to one of their fortunate in-laws and found out where it was coming from.

The matter went unresolved, and in 2014 and two of Mildred's great-nephews demanded but did not receive an inventory of the estate to their satisfaction. So, in 2015 the two great-nephews filed a lawsuit with the county trial court seeking Fred's removal as executor and alleging he misapplied and embezzled royalties that should go to Mildred's actual blood relatives - not a nephew-in-law. Soon, 15 more of Mildred's heirs at law joined the complaint, seeking their share of their aunt's financial legacy.

Another two years passed, and in 2017 the trial court finally issued its ruling.

Those mineral rights, the court found, should be distributed to Mildred's closest heirs at law based on the Texas intestacy statute. The court also removed Fred as executor and appointed one of Mildred's great-nieces as his replacement.

Fred appealed the trial court's ruling to Texas' Eleventh Court of Appeals. On Oct. 31, 2019, the appeals court affirmed the ruling.

If the trial court's decision is ultimately upheld and when all appeals are exhausted, it's likely Fred will face more litigation from in-laws demanding he pay back the mineral royalties that they believe belong to them.

Clearly, if Mildred had relied on a qualified estate planning attorney to assist her with her last will and testament, a protracted legal battle involving her family members could have been avoided. Unfortunately, Mildred's will failed to address the distribution of her personal property, only her “personal effects.”

If Mildred intended to save time and money by drafting her own will, she succeeded. If her estate planning goal was to provide indisputable instructions about the distribution of her property in an efficient and clearly understood way that satisfied her heirs, she failed miserably.

Because she did not rely on the advice of a qualified estate planning attorney to create an estate plan with the proper formality and legal terms of art, Mildred has caused her survivors to expend years of time and substantial legal fees to deal with her ambiguous document.

Unfortunately, Mildred's case is just one example of when taking a shortcut led to an estate plan gone bad. Poor estate planning choices, such as the go-it-alone approach, are made frequently in the digital age. These days, online do-it-yourself kits have become popular as an inexpensive and expedient way to create an estate plan. But the DIY services take a cookie-cutter approach, professional trustee and executor Marguerite C. Lorenz tells Forbes.com.

“Most presume that you already know what you want. But the reality is that many people have no idea what they want or need. Once you get into the complexities of family dynamics and perhaps trust language specific to your state and situation, DIY estate planning can cause more challenges than working with a team of professionals,” Lorenz says. “Here is my caution, based on my experience: You don't know what you don't know. You know some things about how you want to dispose of your assets after you die. What you may not know is all the case law and legislation that have evolved into your state's probate code.”