There's a civics lesson in how out-of-state powers of attorney, advance directives work

For the most part, your advance directive and powers of attorney will be valid in another state. However, not all private and public entities will be comfortable taking action based on these estate planning documents from another state. Therefore, you may need to speak with a qualified attorney to create a new document in your new state or make other special arrangements.

If someone creates an estate plan, it will likely include powers of attorney as well as an advance directive (also known as a living will). These documents make it possible for others to act on your behalf or carry out your wishes when you are unable to.

But for the most part, these documents are created subject to state law. Their enforcement and provisions are also subject to state law. But what happens when you try to use a power of attorney in State A when it was created and designed for use in State B? With the mobility of today's society, this is a very common concern for anyone creating an estate plan.

But before we answer this question, let's have a brief civics lesson about laws from different sovereigns.

Federalism is a form of government where there are two sovereigns. One is at the general, or federal, level while the other is at a more local level, such as a state. In the United States, citizens are subject to at least two sets of laws: federal and state.

Our Constitution also has something called the Full Faith and Credit Clause. This basically means that court judgments, contracts and legal documents will (for the most part) be honored in any other state as long as it was properly created and does not directly conflict with the specific state's laws. Generally speaking, the Full Faith and Credit Clause will apply to powers of attorney and living wills.

But there's the law - and there's how the real world works. This means that one state's advance directive or power of attorney won't always be accepted by everyone else in another state, even if the law says it should.

In most cases, your powers of attorney for health care and finances will be valid in a state that's different from the state in which it was created. But there are a few exceptions to this rule of thumb. 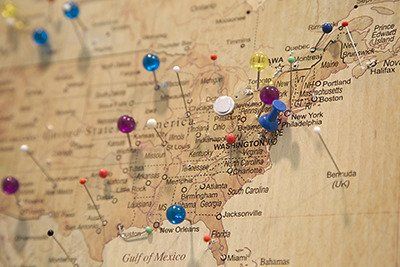 Second, private and public institutions may not accept an out-of-state power of attorney. A bank in Michigan, for instance, might not have any idea about powers of attorney from New Mexico. So if you tried to take a New Mexico power of attorney into a Michigan bank, they might not comply with it. It may be because they're simply not comfortable accepting a document they have no familiarity with.

Advance directives (living wills), which express your end-of-life treatment preferences, are similar to powers of attorney in that they will usually be acceptable in a new state. Most states also have laws on their books that specifically accept out-of-state living wills as valid. But not all states do.

Additionally, even if a state accepts an advance directive from another state, it may only enforce its provisions to the extent it does not contradict its own state laws.

One solution has been to create a type of advance directive that meets the requirement of all 50 states and Washington, D.C. One example of this attempt was with the Uniform Health-Care Decisions Act (UHCDA). As long as an advance directive was made pursuant to the UHCDA's requirements, it would be valid in any state that adopted the UHCDA. Unfortunately, only a handful of states have adopted this law.

This is where things will get tricky and what you need to do will depend on not only your new state, but your home state, too. In some situations, your original advance directive or power of attorney will be enforceable in both states without issue. In other situations, you may need to make special advanced arrangements with the relevant organization that may need to comply with your advance directive or power of attorney. Regardless of what you need to do, speaking to an attorney in each state is critical.

One thing you shouldn't do is create two estate planning documents unless your attorney tells you to do so. This is because having two living wills, for instance, might not be possible. The new living will might revoke the earlier one. Or they will not both contain identical language and the differences could create ambiguity that makes their enforcement complicated or impossible.