Can I leave the shotgun I inherited to my son?

You can inherit a shotgun, and you can leave one by will. But the shotgun must be legal firearm (not a sawed-off), and the recipient must be eligible to possess it. If you are a felon, or the subject of a protective order, you might be ineligible to possess a firearm.

The call you've been expecting has come. The nursing home tells you that Grandpa has passed away. There's a lot you need to do because you live close by. After waiting at the nursing home until Grandpa's body is picked up, you look for Grandpa's will in the top drawer of his chest, right where he told you it would be when he asked you to be executor. You confirm Grandpa's burial instructions and pause to read the rest of the will in case there's something else you need to know right away. You don't expect to inherit anything because there's a generation of living people between you and Grandpa. But you do find out that Grandpa left you his shotguns. You'd like to keep them and someday leave them, in turn, to your son.

After Grandpa is buried and things settle down, you submit the will for probate and receive your letters testamentary. This is the document that formally appoints you executor. As part of your job as executor, you go to the storage unit you rented for Grandpa. In the gun safe you find three shotguns: a really old one, a nice Browning Sweet Sixteen and what looks like a sawed-off shotgun. What are the laws on whether you can have these guns and pass them on?

Let's look at these three shotguns in order. We'll use the law of my home state of Texas. Texas firearms law, like the laws of many other states, is heavily influenced by federal law. But Texas is a strong Second Amendment state, too. There could be, and probably are, additional laws on what kinds of firearms you can possess depending on where you live. Texas law should be treated as an example of minimal restrictions on firearms but will give you an idea about the questions to ask in your own state.

Texas defines “antique” or “curio” firearms not to be firearms at all, and therefore none of the possession laws apply to them. An antique or curio firearm is one that either:

If the really old shotgun was manufactured before 1899, it is not a firearm even if it uses center fire ammunition because of its age. And yes, it might use centerfire shells because they began becoming widely available in the United States by the 1880s. But it is a firearm if it is a replica that uses shotgun shells. Either way, you can keep it.

The Sweet Sixteen shotgun is not only legal but a classic firearm. Browning began manufacturing it in 1937 but ceased in 1992. Your son will be pleased with this inheritance – if he is eligible to have it, as we'll discuss below.

This shotgun presents a problem if it is, in fact, a sawed-off shotgun. Texas calls them “short-barrel firearms.” A shotgun is short-barrel if it either:

Possession of a short-barrel firearm is against the law. If it is a sawed-off, you can't leave it to your son. Technically, even though you are representing Grandpa's estate as its executor, you are breaking the law by possessing it right now. What to do? Call the local police or sheriff, or even an office of the federal Bureau of Alcohol, Tobacco, Firearms and Explosives, to find out how to surrender the shotgun.

If your son is at least 18 years old, there's no problem with him owning a shotgun, so you can leave him the old shotgun even if it is a firearm, plus the Sweet Sixteen, if you want. If your son is not yet of age, you are his guardian anyway, so you would simply keep the shotguns for him until he turned 18 when he could formally own them. There's no particular paperwork necessary. You son would simply sign a receipt for the shotguns.

We're assuming that your son, if an adult, has stayed out of trouble with the law. The law can keep a person from owning a shotgun if the person committed a felony. The question is, how long ago did the person commit the crime?

In my state, a person can possess a firearm after the later of the fifth anniversary of:

If your son was convicted of a felony and the time has not run, and you die before it does, then your son cannot have the shotguns even if you leave them to him in your will.

In Texas, one statute says a court may impose such a provision, but another section of the law says (in all caps) that a person who is the subject of a protective order may not possess either a firearm or ammunition. There are exceptions for sworn, full-time peace officers and a few others. 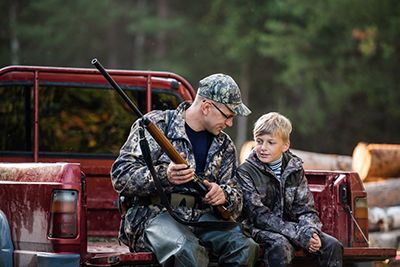 Things are pretty clear. Whether or not the old shotgun is a “firearm,” you can leave it to your son in your will, along with the Sweet Sixteen.

But there is a workaround. The law prohibits possession of a firearm. If your son could not have the shotguns because of a felony conviction or a protective order if you died now, you could include a provision in your will leaving the shotguns to him if he were eligible to receive them, but if not, leaving them in trust with someone else who would have the duty of giving them to your son once he became eligible to receive them.

The one thing you, as executor, should do without delay is call law enforcement to figure out how to get rid of the sawed-off.