Disinheriting a child: A celebrity example of what to do and what not to do

Estate planning is very important for virtually everyone. It is of even higher importance for people who have special estate planning needs or goals. The shop and three members of the Harrison family (Richard, his son Rick and Rick's son Corey) were the focus of a History Channel show called Pawn Stars.

After Harrison's death, several facts that the family had kept private during Richard's lifetime came to light. One was that Richard battled Parkinson's disease for some time before his death. Another was that, according to People.com, Richard had updated his will only a year before his death to alter the distribution provisions. In the 2017 update, Harrison left one of his three children nothing.

This action by Harrison offers two very important lessons. One is the importance of acting promptly to update your estate plan when there is a need. Harrison completed his plan update in 2017 and died in 2018. His case shows that, once you see a need to update your plan, there is no time like the present to get it done. 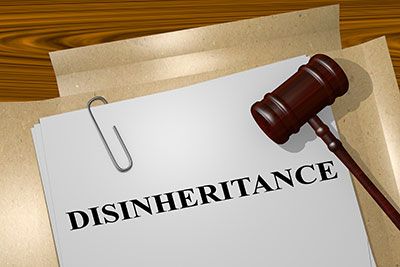 Additionally, Harrison's estate plan an example of how it is so very important to make sure you go about disinheriting a close relative the right way. When you disinherit someone, you are taking legal action to prevent that person (and perhaps their descendants) from receiving any of the wealth after you die. The law gives people broad control over whom they include and exclude in the estate plans.

Disinheriting a close relative, such as a child, is often a complex choice. Whatever the reasons that motivate you to do that, they are your own, and your plan, as your legacy, should reflect your goals, preferences and desires. The law generally allows you disinherit anyone except a surviving spouse.

Many internet articles about the 2017 update of the Harrison will were purposefully vague, leading shocked readers to think that perhaps Richard had disinherited Rick, his co-owner of the pawn shop and co-star on the History Channel series. Only after clicking did the reader learn that Richard had disinherited a different son other than Rick. However, there is actually a very plausible reason why someone in Richard's position might disinherit a son like Rick, even if their relationship was loving, amiable and healthy. Some people see the goal of their estates as providing beneficial financial boosts to their beneficiaries and meeting their unmet financial needs. Because of that, they might choose not to leave anything from their estate to a child who is already profoundly wealthy on his own.

Harrison's will stated that “I would like to express my love and affection for [Christopher Harrison]; however for the purposes of this Will, I have intentionally and with full knowledge failed to provide for him and his issue.” There are some useful pointers from this. One of the biggest is that you should name specifically the child you are disinheriting and state specifically that he is getting nothing. This can prevent him from claiming later that he was accidentally omitted from the will, which could allow him to claim a portion of the estate equal to what he would have gotten if there had been no will at all.

The other lesson is the importance of using neutral language in announcing the disinheritance. Even if there was something negative or upsetting that fueled your intention to disinherit a child, it also likely still true that you have “love and affection” for that child. Language like that used in Harrison's will serves a very strategic purpose for meeting your goals. Going into too much detail airing familial “dirty laundry” or including within the document too many negative specifics behind your decisions may lead to more than bruised feelings; it could open the door to a costly and time-consuming court challenge to your plan.